Upgrading to the new 2022 2.1 SMF core (years in WIP)! Mobile/Phone support by default, finally! I must port all my custom features and redo the theme however, but worth the trouble! I may still look at XenForo too.

Last post by thesteve - October 22, 2022, 12:54:26 AM
Ok for starters the issue was unlikely motor related
Order of operations
Start sent from software
Check door switch
Check head position by bumping the limit switch
Mirror check (laser bobs)
At this point the laser head will trigger the F ok pin on the CXA1081 to the CXA1082
If the 1082 sees the pulse it moves to focus check (spools spindle and moves lens up into focus lock)
If focus lock is achieved it adjusts spindle speed to match data clock and begins read
#5

I made a special blast-from-the-past screenshot in honor of your visit! ; ) 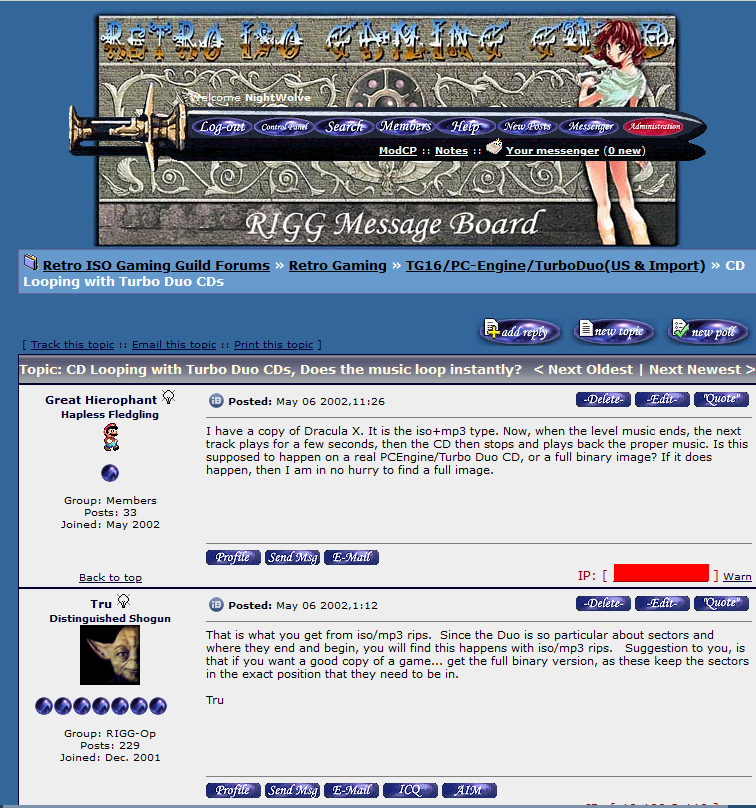 Look familiar ? It's my/our old PC Engine RIGG (Retro ISO Gaming Guild) forum running locally, ~20 years to the day, wow! Some day soon I hope to export/upgrade it to SMF and publish it here as read-only to make more PCE/Ys history available: pcengine-fx.com/rigg/. So that's how I remembered your old Mario avatar and just patched it in. If you use another, feel free to update. : )

As for your problem, I've forwarded it both to thesteve and Downtown Chris Brown (AKA Keith Courage)! I'll let you know if I hear anything back.

We might even get a visit from Steve, just got his account working (he was our top EE, Voultar-level).
#6

Last post by Great Hierophant - October 21, 2022, 09:39:59 AM
So I wired in the new harness, plugged in all the cables, set the spindle to what appeared to be an appropriate height, popped in a regular CD drive, put the magnetic clamp on the CD and . . . the disc refused to spin.  I swapped back the original assembly and same result, no spinning.  I think the BA6290A may be on its last legs.  While the drive sled motor works, that seems to be less of a power draw than the spindle motor.  I can also see the laser move up and down to focus and through my camera see the laser light.

I should also mention that the HuCard portion of the console works perfectly and is RGB modded with the modern doujindance mod.  When I try to run a CD I get the typical "Please Set Disc!" message.
#7

Last post by Great Hierophant - October 20, 2022, 08:53:12 PM
I have acquired a recapped PC Engine Duo, but when I got it the CD spindle did not spin up sufficiently to make the disk spin and nothing could be read.  I could see the laser head moving up and down, so I thought that the motors may be bad.  I bought a new disk laser assembly : https://www.ebay.com/itm/182710804499 to replace the old one.

When I got the new assembly today, I found two problems with it.  First, the wiring was different but the same points are present.  The second issue is much more of a problem.  Simply put, the spindle platter on which the disc sits is below the laser head assembly.  If you put a disc on the platter, half of the disc will rest on the laser assembly plastic.  I don't know how this was supposed to work with anything, but I do notice that there is a silver shaft that has room to move the platter upward on this assembly whereas on the old assembly the shaft was about as high as it could get.

I really believe that the disc shaft motor on my old assembly is not working anymore.  I applied ~3v to it and the spindle did not move where it did move on my new assembly.  The disc spindle motor and drive sled motor are powered off the came cable and BA6290A, and the drive sled works fine.  I found out how to adjust the height of the platter relative to the shaft, so I should know more once I replace the power cable from the assembly.
#8

Guess I've had a setback rebooting with the SMF 2.1 core, I have to redo the theme and add the basic chatbox again, so less to see here now...

Pretty much looks like the nfg forums. On the plus side, lots of Photobucket images have been cached (11k+) without the watermark, more avatars, so image recovery behind the scenes has been my focus. I'm OK I guess if I can only manage to archive the good threads, PCEFX history, for random google searches. Judging by NFG and the 2018 disaster, I can't expect to recover the activity we once had, have to be realistic about the goals here.

Anyway, I keep active mostly on Twitter (/NightWolve75) if anyone wants to reach me or follow/catch-up.

Last post by NightWolve - June 07, 2022, 02:08:06 AM
Hey, so your thread doesn't have to be lonely, continuing on the WayBack/Archive.org theme: GamingAlexandria (with help/contributors) scanned/preserved EVERY PC Engine Fan issue this year for upload to WayBack!!!

You already knew I'm sure, but it's relevant PCE content that should be shared. Plus I added more embed power (to Wayback links & my auto Twitter embeds), looking much better!

PC Engine Fan issue #1 began in December 1988:
...And ran till October 1996:
Random Highlight: Page 57 of issue #1 was a Studio Ghibli ad for their My Neighbor Totoro anime movie which was also released that year. 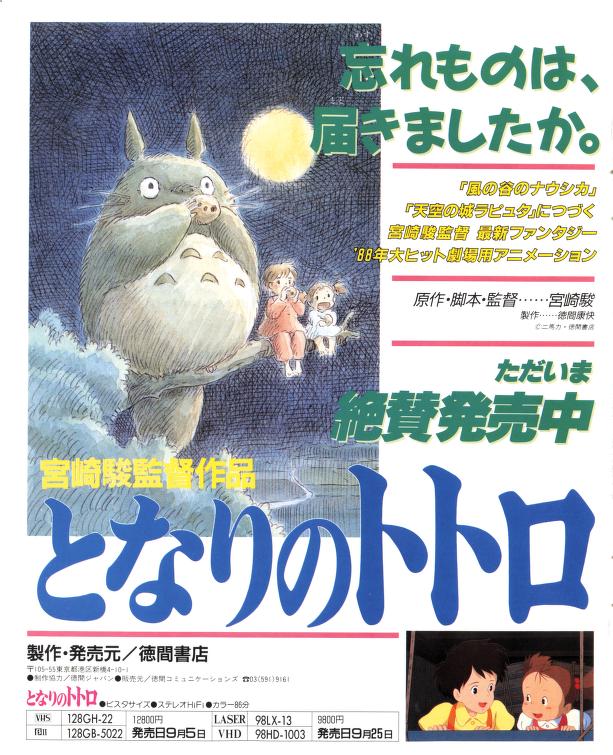